OKR – What, How, And Why Is It Vital? | PeopleStrong

We live in a world that is driven by workaholics. It’s an oversimplification, but quite accurately put, that most of the productivity of whether an organization, an establishment, or even a household, is significantly run by the ones who cross their tasks as they go about each of them. Studies have shown how keeping a tab over one’s productivity, something as simple as a note of chores, can increase your zeal to get the job done, and that too, on time. It’s an age-old practice that has channeled productivity even for ones’ who are otherwise disorganized with even simple tasks of daily life.

Put this simple practice into the vast studies of productivity enhancement methods perfected and approved by the greatest minds in corporate and management – we get the ‘OKR’, which is by definition – “Objectives and Key Results".

What is an OKR?

OKR is a collaborative goal-setting tool that can be used by teams or even individuals. The tool is used to set challenging, ambitious goals with measurable results. With the help of OKRs, you can track your progress, create alignment, and encourage engagements around measurable results.

Used vastly by several corporate establishments, business teams, and even individuals, OKRs are effective in tracking one’s, or a team’s productivity over a due course and evaluating their progress with measurable parameters.

In simple terms, an objective is nothing but what needs to be achieved. By definition, objectives are resolute goals, sometimes ambitious or achievable. When properly designed and executed, objectives are what is needed as the first step towards accomplishing a task.

Key results are the benchmark against which the success of an objective is measured. Effective KRs are specific and time-sensitive. Most of them are measurable in order to determine the effectiveness of the results achieved.

The initiative is the journey between objective and key results. It comprises the tasks and projects undertaken in order to achieve the KR.

The genesis of OKR traces right to 1954 when it was first coined by Peter Drucker as Management of Objectives. After co-founding Intel in 1968– Andrew Grove, during his tenure as a CEO, went on to perfect Peter’s MBO and created the OKR as we know it today- John Doerr’s Intel in 1974, and got well-acquainted with OKRs during his time there. After that, Doerr ventured with Kleiner Perkins Caufield & Byers, who were one of the early investors of Google. He became an advisor to Google in its nascent stages, as he went on to introduce OKR to its founders – Larry Page and Sergey Brin. They went on to implement OKR at Google, the same tool that is still in use at the company.

As the story goes, Doerr presented a power-point presentation to the then young founding team of Google in 1999. Here ‘s an excerpt of the Doerrs’ objective and key results and its format for the presentation: 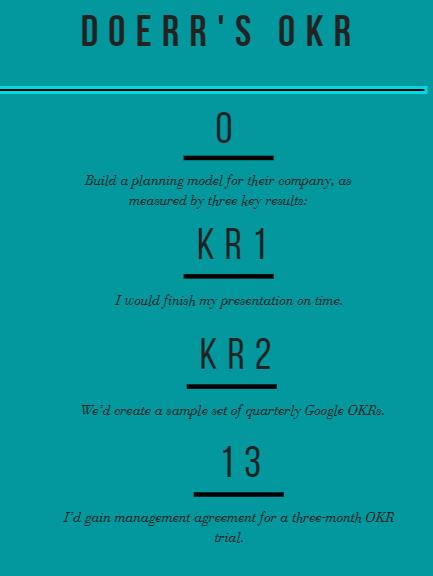 When Doerr was demonstrating the concept of OKR to the young founding members, he most definitely had a particular goal on his mind. However, little did he know that his work will become the epitome of goal management of the modern world. It is how OKRs can define success and at different magnitudes. The differentiation between OKRs is also based on this particular aspect.

Committed OKRs constitute goals that we need to and have to achieve at any cost. Without committed OKR, we don’t have success. We will prioritize everything to ensure this OKR is successful by the end of the 90 days cycle.

Aspirational OKRs push us to dream and be aspirational. They always require teams to push a little harder to go that extra mile for achieving success. For this reason, they’re harder to accomplish, although they are significantly important as they get teams to get out of their comfort zone and think out of the box to accomplish something they haven’t tried before.

Learning OKRs can be labeled as explorations or experiments to prove a hypothesis.

The general target with a Learning OKR is to report findings or determine the status hypothesis at the end of the 90 days. Learning OKRs are best for research work where there isn’t much to count on the initial input and might need a change of course as the project progresses further.

What are the benefits of using OKRs?

OKRs have a myriad of benefits when it is implemented in businesses and teams. The prime value of an OKR tool is defined by the tangibility of its results and a detailed report on how to improve on the given situation. There are several other ways an OKR can benefit your organization or the team.

There has been profound research that shows that the teams that employed OKR have performed better in their jobs impacting organizational growth significantly against those who weren’t using OKRs. In fact, teams and businesses are usually advised to employ OKRs to better monitor their growth trajectory and keep track of their progress.

It has been observed that a lot of organizations that do not have definite goal management in place, focus on output whereas the organizations that have a considerable discipline towards their annual and quarterly goals focus on outcomes. OKR changes this focus from output to outcomes. The tool helps in increasing accountability, transparency, and goal alignment within an organization, which in result delivers increased performance and employee engagement.

What OKR tools are available?

If you are looking for a reliable OKR tool in the market, then PeopleStrong Alt Performance- OKR based Performance Management software could be the best match for your business. The PeopleStrong OKR enables you to provide focused alignments and performance-based execution across teams. By deploying enhanced focus from top-to-bottom, the software assists the entire organization on what are the things needed to be done and avoided when they function as a cohesive unit.

What helps Alt Performance’s OKR Software stand apart in the market is its relevant designs at the core of the software. The extensive experience of implementing OKRs across various industry sectors has translated into insights and intelligence that define what will work for the client and what won’t. An easy-to-use interface, meaningful analytics, and self-service module make it a desirable choice for modern businesses.

What Makes a Good OKR?

To begin, formulate a clear map in your brain. Clarity is everything. Objectives stem out of missions, so think about your final mission, where do you see yourself at the end of this? Once you have that, curate goals that are effective but achievable. Remember, extra is not equivalent to good. The end of every successful OKR procedure is to end with an intense analysis of the result. The aim is to continue and update the forthcoming endeavors.

To conclude it all, experts often suggest that healthy productivity is the building block of success, hence working on systemizing one’s life can ultimately lead to having a happy and contented life. With OKRs, today, this milestone only seems like a cake-walk. Given the right time and effort, it is achievable in the long run as well.

Talk To Our Experts