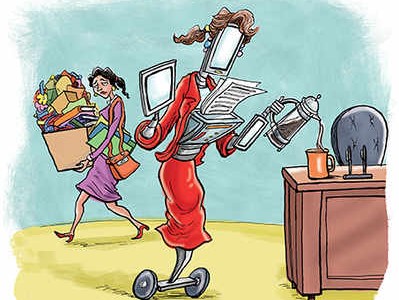 How Siri killed the secretary | PeopleStrong

Last year, Bipin Preet Singh let go of his personal assistant. A traditional secretary is just a messaging medium and not incredibly efficient,” says the CEO and founder of MobiKwik. “Plus, there are some things that I wouldn’t schedule through a secretary.” For people who directly report to him, a secretary represented a layer of bureaucracy. “It’s not good for a growing startup. We encourage interaction and informal conversations,” Singh adds.

Times have never been tougher for the secretary. Competing with virtual assistants, Google calender and mobile apps that can make bookings, take down minutes of meetings, store records and even send reminders to drink water, the secretary has lost some of his/her swag and salary.

For an earlier generation of corporate leaders, having a secretary used to be a symbol of status, a measure of their professional success. But new-age managers scoff at the idea of having one. “Communication has evolved so much. Can you imagine your WhatsApp being managed by a secretary? A generation ago, office communication used to be formal and protracted. You needed help in writing it. Today, we keep our mails short and efficient,” says Anshul Gupta, co-founder FastFox, a real estate firm based in Gurugram.

In their heyday, secretaries did more than manage the boss’s calendar. Everyone wanted to be on their right side. To get an audience with the boss, employees had to go through the secretary. (This is still true for government.) They were the go-to person for everyday needs. “You needed a stapler, an envelope, office gossip or the address to the nearest pakora joint, you went to this person. Now, we have to learn to do everything on our own,” says a senior executive with an FMCG brand in Delhi.

Popular culture, of course, played up the sexy secretary stereotype — on screen, she was invariably a femme fatale in tight skirts whose suggestive glances to her alpha-male boss conveyed far more than her notes in shorthand. The hit TV series Mad Men is the most recent example of such stereotyping. One of its most loved characters is Joan Holloway, an ambitious, red-haired secretary who understands that she can use her sexuality as currency. Talking of bosses, she says, “He may act like he wants a secretary, but most of the time they’re looking for something between a mother and a waitress.”

Not anymore. Shelly Singh, co-founder and chief business officer at PeopleStrong, an HR solutions firm, says hierarchies are dissolving and office culture is changing. “People don’t need a separate person to organise coffee and snacks for a meeting. They will walk to the cafeteria and get their own coffee.” In addition to technology, tight budgets are also driving a nail into the secretarial coffin. While startups were the first to dispense with the personal assistant, even big corporations are looking at leaner organisations, says Anjali Raghuvanshi. chief people officer, at Randstad India. “Many companies now outsource this role to a third party,” she adds.

At least some are busy reinventing themselves. Amit Garg, 41, is senior manager, partnership, alliances and corporate governance at PeopleStrong. Just a few years ago, he was the executive assistant to the chairman and CEO.

“I used to manage his calendar, bookings, record minutes of meetings, etc. But I realised that as technology progressed, my bosses could do most of these chores on their own. So, to stay relevant in the company I decided to upgrade my profile,” says Garg, who now commands a “much better salary”. He volunteered to digitise the company’s compliance data and learnt the ropes of non-secretarial work on the job. “Plus, I did an in-house course on project management. I was open to feedback and requested my managers to mentor me.” Today, secretarial work is just 20% of his daily work. “I am in a more productive role now,” he adds.

Neeraj Sharma, senior director, HR, at Fourkites, an MNC in Chennai, says secretaries can “evolve to a chief-of-staff role, which is like a mini programme manager.” Or, they can take up sales coordination roles. “However, the smartest of them upgrade as business analysts who help interconnect multiple parts of an organisation,” he adds.

Raghuvanshi says leaders now want strategic assistants who can help them prioritise their tasks, do programme management, and basically manage their time better. “At Randstad we have seen that 80% of requirements in this role now are of strategic planning.”

Achal Darbari, 45, founder, Zenwise Technologies, has seen both sides of the picture. Assigned an assistant when he was a senior executive in a company, he chose to not hire one when he turned entrepreneur.

“Of course, having a secretary makes life easier, and you feel good about it. But these are golden shackles. I have not seen much difference between having a secretary and not having one. I am much more organised using technology. Having a human element introduces errors and precious time is wasted in back and forth,” says Darbari. He misses the personal touch, though.

“When you come to office, they tell you what’s lined up for the day and then move on to light banter. They ask about your weekend, the kids’ results… Alexa will get your nuances, understand your language but cannot be a substitute for human interaction,” Darbari says.

As for whether you should get a bouquet or a cake or both on your mother-in-law’s birthday, let Siri take a call.

This article was published on The Times Of India